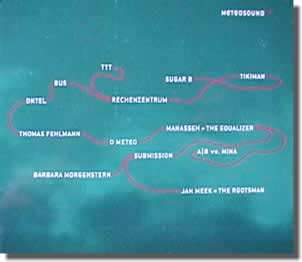 A very pleasant compilation I intend to come back to again and again. Meteosound is an electronic dub compilation from Berlin with tracks by Tikiman, Sugar B, Rechenzentrum, Bus, Dntel, Thomas Fehlmann, D Meteo, Mina, Barbara Morgenstern and others.

You don't really need to know who is on it, because the comp flows with a single voice, much like the Pay It All Back series on Adrian Sherwood's On-U Sound label. Meteosound also reminds me of the Mo Wax compilation Now Thing.

This compilation is way better than I expected! I may have passed it by were it not for a photo that gullbuy contributor Teresa brought back from her last trip to Berlin. She took a photo of a flyer for a Shitkatapult show at a club on Ziegelstrasse, where the night was split with Meteosound. That instantly gave this comp credibility. I bought it the next time I went to Harvard Square here in Cambridge.

I have listened to this record many times without paying any attention to who does what song. As I put this review together tonight I was surprised that the songs I liked best were not by the big names.
I love Sugar B's track 'Sugar's Authentic Dub Disco.' It is the sassiest cut on the disc.
Tikiman's 'The Sound' sounded much better to me than the collaboration he did with Tarwater for the Soul Static Sound label a few years ago.
Rechenzentrum + TTT's cut 'Tetris' is really cool. It is relaxed but sharp at the same time.
TTT + Meteo perform my favorite track on the comp, called 'Peru.' 'Peru' has the dry sharp sound that I look for in Berlin glitch-tech, grounded in a persistent dub beat. Just so you know, this CD has a real dub sound. It is not the submerged underwater sound of Pole, it is a fluid lively sound like the On-U Sound bands.
A|B vs. Mina have a great track called 'A To Dub.'
Finally Manasseh Meets The Equalizer do 'King Of the Land.'

Each track I have mentioned is 100% satisfying. While none of the tracks are poor, I found Bus, Dntel, Thomas Fehlmann, and Barbara Morgenstern's contributions to be merely adequate.

Meteosound has more than enough great tracks (six out of fourteen) to justify picking it up, especially when the good ones are this good.