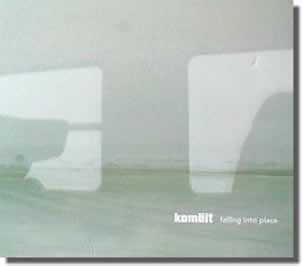 I think you may find yourself haunted by this elegantly beautiful album by Komeit just as much as I was. Full of favorites for this summer of 2002, Falling Into Place is able to combine the best of bedroom casio pop (without sounding like it was recorded in a bedroom), New Zealand-inspired melancholy (at least I heard it - it might well be a To Rococo Rot styled- fixation on acoustic tones) and the atmospherics of Brian Eno circa Before and After Science. My only complaint would lie with the amount of instrumentals included - their vocals are rendered so hauntingly I would have loved to hear more vocal tracks - that fact lends an unfinished feeling to this album - which I suppose could be looked at as either a good or bad thing (too polished vs a 'live' development).

1. I Can Tell - Starts out with an elegant tension - thanks to the acoustic guitar with tension exuded thanks to the sound of the fingers moving on the neck of the guitar. Lovely male and female duet singing, simply effective guitar riff solos, somber keyboard backing and a antiquated drum machine all add to the charm and grandeur. Thankfully not falling into the trap set by many previous bands with a melancholic structure: there is a lot going on to keep the interest but not to clutter; it never is tediously simple for a simplistic sake.

2. Three Hours - an upbeat followup to the 1st track - which somehow conjures memories of the New Zealand scene of music (Cake Kitchen Et Al) in the guitar melodies, infusing this with a more Germanic atmosphere (A La Brian Eno) with the sweeping keyboards and buzzing synths while keeping the indie-ness of the basic unmanipulated drum machine and pleasantly downer male- female duet singing. Not too bedroom rock to sound low-fi, and enough tension thanks to the rhythm stops and starts, stopping during the vocals being the added touch.

3. Readymades - Very Brian Eno melody in guitar and keyboard (By This River comes to mind).

4. Parade - An instrumental that has a stilted rhythm with a pulsing synth accentuating it, coupled with an addictive indie- rock guitar melody and a distorted keyboard solo: the stuff that indie rock dreams are made of.

5. When It Starts - A highlight on the recently released Komeit remixed 12 inch single - things are rather simpler in the original mix, with emphasis placed on the vocals thanks to the extended introduction of just gently guitar, popping drum track and subtle keyboards which add accent. Things are kept simple throughout giving this track a demo feel to it.

6. Schemes Like These - An instrumental with the added touch of piano, celeste and violin, this track moves in a more organic direction, sounding somewhat like an improvised indie rock track.

7. Saturday Night - The overall peak for me on this cd - with a male lead vocal sometimes double- tracked which says: 'Lets float like the moon through this saturday night, we're restless and tired, we're lonely and sad...'

The female vocals are used more as harmony here. The piano is played in unison with the lead vocal this time, while the drum track moves at what seems like a slow pace, giving it that practicing with the casio sound I like so much - making the song even more full of that sadness it is trying to convey.

8. Holler - Another instrumental which brings to mind the New Zealand scene - with softly plucked acoustic guitar/fingers sliding on strings and a softly thumping bass drum. The melody recalls the Yo La Tengo cover of John Cale's Andalucia (from the Fakebook album).

9. Rearrange - This song has single written all over it - lead female vocals with male vocals in response mode encapsulated in sweeping string synths and echoed keyboards and a more varied drum machine than most of the other tracks. I can hear all sorts of remixes coming out of this track too.

10. It's A Good Thing (You Called) - Ending on a somber note - and instrumental with the buzz of tape hiss (a first on this cd - or is that an amp?) accompanying the softly plucked guitar and gorgeous piano motif - chorus-like synths and atmospheric keyboards add to this fitting end.