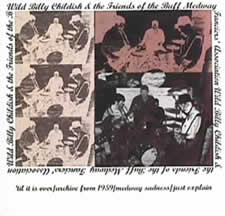 Billy Childish has slowed down the deluge of records he used to release under various monikers to a well mannered trickle as Wild Billy Childish & the Friends of the Buff Medway Fanciers' Association, or The Buff Medways for short.

With only a few 7's under their belt, this new band have kept a very low profile. This EP will be tonic for longtime Billy Childish fans. The four Billy Childish penned songs on this EP are roughly recorded and sound like they could have been released under the moniker Thee Headcoats.

While I love Thee Headcoats (as well as Thee Headcoatees) I admire Billy for exploring new sounds on his covers of the Jimi Hendrix songs 'Fire' and 'Manic Depression' and on the 'Don't Hold Me Back' single.

Three of the four songs on this new EP have me excited. 'Just Explain' is a super fine Buff Medways track that is worth buying this EP for alone. I like 'Til It Is Over' too, with its Kinks style guitar riff, and 'Archive From 1959' for its energy.

This EP is the first release on a new label from San Francisco here in the states that promises to release lots of Childish related singles, with upcoming Wildebeests, Masonic, and Holly Golightly singles on tap.