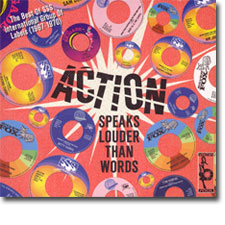 Run by a former Mercury Records A&R man, Shelby Singleton's SSS International label was a label based out of Nashville that released a variety of recordings that weren't country, and is especially interesting to soul collectors for the more obscure southern soul records released between 1967 and 1970.

The SSS International soul records aren't as well remembered as the records released on more prolific high profile labels like Stax/Volt, so it's a great place to dig up more obscure soul recordings. Other labels that fit under the SSS International umbrella included here are the Silver Fox (another Shelby Singleton label co-run by Lelan Rogers, who had previously run the Texas-based International Artists label with releases from the 13th Floor Elevators, the Red Krayola, and the Bubble Puppy) Exit, and Honor Brigade labels.

Sam Dees's Lonely For You Baby can also be found on Trikont's Down & Out: The Sad Soul of the Black South (Trikont is known for it's interestingly themed compilation like their Dead & Gone compilation of death songs). It's one of the few songs that sounded familiar to me on this compilation, maybe because it has a classic soul sound (or probably sounds like a more popular soul song I can't place). It's got a great piano led melody and a soulful lead vocal by Sam, backed by some sassy horns and background vocals.

Marilyn Haywood was a background vocalist on albums by Eddie Harris, Bo Diddley, and Ahmad Jamal. Her song Mama's Baby (Ain't A Baby No More) (miscredited on this disc as Mama, Ain't A Baby No More) is a girl power groover of the first order, with a hot laidback slapping groove and an amazing lead vocal from the under appreciated Haywood.

This was originally released with Think About It (not included here) as the b-side (I'm guessing this was a cover of the James Brown song that was the title track to Lyn Collins Think About It album from 1972) on Silver Fox. Marilyn Haywood definitely has a Lyn Collins sound.

Here he's given a Curtis Mayfield & the Impressions sound, which fits his higher ranged, feminine sounding vocals. Reuben Bell was a unique talent who also wrote songs for Bobby "Blue" Bland, Geater Davis, and Ted Taylor - who all recorded songs written by him.

Betty Harris has had a resurgence and revitalized career in recent years. She originally gained fame covering Solomon Burke's Cry to Me issued on the Jubilee label in 1963, but eventually teamed up with New Orleans producer Allen Toussaint for some prime era New Orleans R&B in the late 60s.

There's A Break In The Road heard here was her final collaboration with Toussaint in 1969 and it's a funky mother of a track with a killer groove and added guitar with some choice feedback used to augment the horns. Betty Harris' vocals are filled with a deep soulful sound. You can tell she digs real deep when she sings lyrics like:

Ed Mendel's Georgia based Men-Del and Peggy Sue labels were home to Jo Jo Benson and Johnny Barfield & The Men of S.O.U.L, talent Shelby Singleton hunted down for re-release on his own label. Jo Jo Benson (aka Joseph Hewell) is best remembered for his duets with Peggy Scott (including which A Lover's Holiday).

The other Ed Mendel group with releases on his Georgia based Peggy Sue label that was mined for SSS International release was Johnny Barfield & The Men of S.O.U.L. Soul Butter, heard here, was originally the b-side to Mr. Starlight (a ballady type song also covered by Bobby Moore & the Rhythm Aces). Soul Butter is no ballad, in fact it sounds like frat rock more than soul really, with its organ groove and call and response chorus of "Soul Butter!" Johnny Barfield & The Men of S.O.U.L were not as successful as Jo Jo Benson on SSS International.

Jamo "Bahama Mama" Thomas was a percussionist/singer from the Bahamas who had previously released records on the Conlo (produced By Jerry Butler), Sound Stage 7 (as Jamo Thomas And The Party Brothers), Thomas (a label run by Jerry Butler's former chauffeur, Eddie Thomas), Chess, Decca (a re-release of Bahama Mama originally released on Sound Stage 7) and the Perception labels. His single on the Perception label ended up being the first release on SSS International in 1970 (released as Mr. Jamo). Shake What You Brought With You is a funky piece of work augmented by sitar, horns and some flutes, a funky beat and Jamo intoning "Shake what you brought with you!" every so often.

Rosalind Madison released a couple of collectible singles including Neighborhood Girl on Liberty, and Use What You've Got (which can be found on the Sundazed My Goodness, Yes! Silver Fox Soul Collection) with a cover of Bobbie Gentry's Fancy (a song also covered by Lynn Anderson and, more recently, The Geraldine Fibbers) on the Silver Fox label. Fancy, found here, is a fine swamp tinged southern soul nugget, with Rosalind taking Bobbie Gentry's style even deeper into the south.

Robert Parker was a saxophonist/singer from New Orleans, best remembered for Barefootin' released on the Nola label in 1966. In 1969, he found himself at Silver Fox and SSS International. Robert Parker's The Hiccup was a song for another dance craze that didn't take off like he hoped it would.

If you want something funky and funny, check out The Bright Lights' Detroit themed Motor City Funk, a track that was sampled on DJ Shadow's Endtroducing. It's a cross between early rap and comedy (similar to Pigmeat Markham), all with a funky backbeat.

Bill Hemmans & Clay's Composite were a soulful jazz group who released a couple of singles on SSS International, including this 6 minute version of the Temptations' Cloud Nine (the flipside of this single Soul Serenade can be found on the Sundazed Shake What You Brought! SSS Soul Collection). This is a fine way to round out this compilation, with an extended soul jazz workout that really smokes.