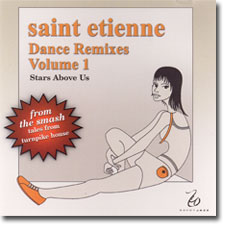 Dance Remixes Volume 1 is a nifty US released EP with 7 mixes of the song Stars Above Us from the record Tales From Turnpike House.

The song was well-chosen as a remix track, as it is a disco-fied stomper that is completely bouyant and upbeat.

Even though there are seven versions, there are really only three: the album version , and three edits each by two remix artists, Eric Kupper and Jeff Barringer.

Eric Kupper runs with the disco feeling of the original and stretches the track into a real club tune. He does not remove Sarah Cracknell's lyrics, so the song retains all of the charm of the original. There is a club mix, a shorter radio mix, and a dub mix by him.

It is really nice that Savoy Jazz released this EP. It may bring life to the Tales From Turnpike House record, which came and went without much notice despite its many good songs.

I am a big Saint Etienne fan. They have the best fan club ever (free to join, with fan club only CDs that are top-notch) and keep putting out records that entertain. If you are a fan too you really must track down this EP and buy a copy.