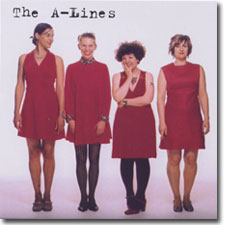 The A-Lines are a London based 77 styled punk rock band made up of Kyra, Delia, Debbie and Julie.

Kyra Rubella was part of Thee Headcoatees and The Delmonas, and sang the classic Playgroup song Make It Happen.

Delia was in The Action Time, The Family Way, and Mambo Taxi. For years her presence make the Portobello Road Rough Trade shop a brighter place to be in as she clued customers in to newly arrived records and singles.

If you liked Buzzcocks on their Spiral Scratch 7inch you will love the songs Four and Sideways. Both have a wonderful guitar sound like Pete Shelley's cheap and broken Starway guitar. Listening to Four you could think of the Buzzcocks song Fast Cars.

The record was produced by Billy Childish. He did a great job, making the sound fat and direct.

Nothing Personal has multiple wild screeching vocals and a riot grrl sound.

One Day was originally released in 2003 on Waxfruit records on a split single with Boston popster Miss Mary. It has a 60s sound unlike the rest of the tracks on the CD (except Can't Explain) and sounds like early Pandoras. Can't Explain is not a cover of the Who song, though it does have a riff that sounds a bit like The Kids Are Alright crossed with Needles and Pins.

Wrong Way Home and Nice use background vocals more than any other tracks on You Can Touch.

The song You Can Touch starts off with a riff that will make you think of Damned Neat Neat Neat.

Nice is sung in Flemish and has an ascending riff like the Richard Hell and the Voidoids song Love Comes In Spurts. As with several other songs on the disc, I think of the French punk band Stinky Toys or The Stranglers side project Celia and the Mutations - very favorable comparisons!

Sideways has screaming background vocals like Rita Rat on the '79 Boston punk band Unnatural Axe on their classic 7inch They Saved Hitler's Brain.

Agitated captures the feeling of frustration. It seems to be about someone who gets wasted a lot.

Sometimes I think I'd be better off dead, just like my cousin Fred.

A few of the tracks don't leave much of an impression (More Wax Please, Day One, Last One There), but even these songs could be highlights on a record without such excellent tracks as Nice , Four, Sideways and Wrong Way Home.

The Delmonas - Do the Uncle Willy