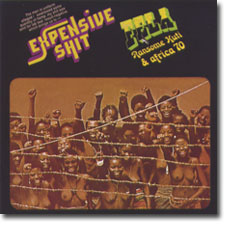 I've coveted my vinyl copy of Fela Anikulapo Kuti & Africa '70's Expensive Shit album for many years, so I was very excited to see that it had been reissued in 2000 on a two-fer with another album called He Miss Road which I had never heard.

Fela's albums in their original versions are usually quite short when one or two songs between 10-20 minutes could fill up an entire side of an album. Couple this with how prolific Fela was in his heyday in the 1970s - it makes total sense that in the cd age, his music would be more enjoyable in two-fers. This is the first Fela two-fer I've been able to hear, after collecting a number of his LPs, but I've seen them and been quite curious.

Fela invented Afrobeat back in the 1960s and perfected it during his prolific and fascinating career throughout the 1970s. Afrobeat follows up the sounds of James Brown's funk with the added combination of African rhythms, chanted background vocals, Fela's half rapped/half sung lyrics, jazzy keyboard and horn solos, and fiery political themes.

Expensive Shit may sound like an odd name for an album - and well, it is. But what happened to Fela in his life was odd and he tried to show this truly in his music. This often causing himself problems with the government.

The album Expensive Shit consists of two songs - the title track starts out this disc with an intense Afrobeat and electronic keyboard feel. The song is about how the government tried to frame Fela with marijuana possession, but instead of allowing the police to plant some evidence, Fela ate the evidence. While in jail, the police took Fela's shit and examined it as evidence, but Fela was able to switch his shit with the help of other prisoners in the jail. It's truly a bizarre story, and winds up being a hot rapping afrobeat number.

Water No Get Enemy, side two of the Expensive Shit album (and track two on this disc) is a more laidback, philosophical piece of music comparing water metaphorically to the government. Equally as impressive, even as it is more impressionistic.

The second album included on this two-fer is He Miss Road, a very rare Fela album which I had never seen before since it had been out of print for years. It's got a less compacted feel to the Expensive Shit album thanks probably to the more open production of Ginger Baker (from Cream) who had developed an interest in African rhythms. This is an amazing, spacey departure for Fela, a wonderful addition to anybody's Fela collection and especially for those who have not been able to hear this album.

The title track, He Miss Road sounds straight out of the instrumental James Brown bag but with hints of psychedelia added to the percolating percussions and spacey Fela keyboards. Monday Morning in Lagos has a surprisingly jazzy feel for a Fela song.

It's No Possible has a mellow, percolating feel to it as it mutates and throbs along for 17 and a half minutes. There's ample chance for Fela and his musicians to shine on this organic masterpiece that is another incredible highlight from this disc.