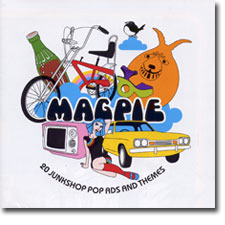 In this day and age, the art of the compilation has become just as important as the art of a single band's release - and labels like RPM and Rev-Ola have stepped up the art in the past couple of years by digging into lost vaults and creating themed compilations which make for incredible journeys for record collectors and novice music lovers alike. Flow and content are equally important in this time of personalized playlists; it's important for record labels to open up the vaults and to divulge the inner mysteries of the hidden cultural workings. No longer satiated with the over-used, we listener thieves need the culture crux of incidentals - the between the line themes of pop life.

RPM started a series of compilation with a Brit sensibility called Lipsmackin' 70s, unafraid to celebrate musical explosions and implosions from the late 1960s and early 1970s with a brash and exciting result. With compilations inspired by the Junkshop Pop Collectors Guild called Velvet Tinmine - 20 Junk Shop Glam Ravers (which collected rare 70s British glam and glitter pop), ZigZag - 20 Junkshop Soft Rock Singles (collecting together British singer/songwriter softrock), Hot Hits on 45 (which collected rare re-recordings of the hits of the day by sessionmen), and Magpie - 20 Junkshop Pop Ads & Themes (reviewed here), RPM has dug into the British vaults to unhouse the un-holy; that which has become increasingly more collectible these days. Pop music which was at once and long ago throwaway (and thrown away), is now collectible: and RPM has done a wonderful job with this series of compilations.

Magpie - 20 Junkshop Pop Ads & Themes was one of my favorite compilations from last year. Its themes are  "TV themes, film music, adverts, junkshop pop; a magpie hoard of incidental music backgrounding the period 1970-1974." I've been a big fan of the easy now sound of breezy, funky, music and it's all here with the likes of: Alan Hawkshaw (session man and arranger for artists like Serge Gainsbourg, Jane Birkin, David Bowie, various British television themes - he has his very own RPM collection called Mo'Hawk which collects together various Hawkshaw organ work and library music); Samantha Jones (member of the Vernons Girls, she also has an RPM disc called Surrounded By a Ray of Sunshine: The UA Recordings which collects her solo work with producers/arrangers Charles Blackwell, Mark Wirtz, Gerry Granahan, and Bill Justis); Les Reed  (producer, arranger, songwriter for artists like Tom Jones, Petula Clark, Timi Yuro, Connie Francis, Deep Purple, the soundtrack for Girl on a Motorcycle); Don Fardon (member of British invasion group The Sorrows and performer of the pre-Raiders version of Indian Reservation); Stanley Myers (composer for Doctor Who and Nicholas Roeg films  - Myers even appeared on a couple of Kinks albums like the Percy soundtrack and Preservation Act 1); Tony Rivers (of Tony Rivers and the Castaways and Harmony Grass - Beach Boys inspired British bands from the 60s with a series of discs on RPM); Steve Ellis (member of 60s British band Love Affair, who worked with Keith Mansfield and has a full cd called Loot on RPM); Mark Wirtz (producer /songwriter extraordinaire who is best known for working with Tomorrow's Keith West on A Teenage Opera, and has many discs out; Mark is heard here under the names The Matchmakers and Krimson Kake); and Andrew Bown (member of Status Quo and played with Peter Frampton). Even an early Elton John version of Spirits in the Sky is heard here which had been compiled in the past, on Cleopatra's 1999 collection Glam Goldmine.

The disc starts out with the tremendous Intro: Come In performed by Peter Wyngarde ( TV star, aka Jason King), this is such a great way to start the disc. Peter Wyngarde is the suave, cheesey British gentleman, inviting you in for a snifter of brandy and a dinner party, dressed in a luxurious robe and with perhaps much more on his mind. Peter ends the disc as well, following Elton John's perfect rendition of Norman Greenbaum's Spirits in the Sky, Peter is heard bidding goodbye in Neville Thumbcatch with soulful female backing and sweet ebb and flow of rhythm.

The Magpie Theme is sung by the Murgatroyd Band which was actually The Spencer Davis Group minus Steve Windwood and with Eddie Hardin singing and it's as catchy as it can get. I never even knew that Led Zeppelin's Whole Lotta Love was used as a TV theme for Top of the Pops. This version performed by Alexis Korner's CCS (Collective Consciousness Society) helps add some life to the flaccid metal posturing of that overplayed lugweight, by adding some smashing horns and flaming flutes and an amazing go go arrangement while still retaining the soulful Steve Marriott styled vocal break and heavy rock guitar. It really doesn't get better than that!

Samantha Jones' Advert for Ford Cars is a breezy delight - a song sung inspired commercially in a way that is just not done anymore. Try driving with a summerbreeze and not a care and let the groove take you away - Barbara Moore style. Get Away!

Mark Wirtz was the British bubblegum king for awhile, and his Matchmakers' Thank You Baby and Krimson Kake's Waiter are both prime examples of Mark's amazing style of gum. Thank You Baby is a stomping gummy masterwork which will truly inspire thanks in his fans. The Krimson Kake track is a groovy instrumental which would no doubt get the groovers back on the dancefloor.

Patchwork's Laughing Sam is a late highlight on this disc - a true revelation with it's maniacal laughing Sam laugh coming in at opportune times over the hotbed organ led instrumental - it reminds me of the mysteriously funky single Mr Penguin (which goes on and on and doesn't seem to end).

Throughout Magpie are the wonders of coke commercials (Things Go Better With Coke....indeed) as sung by the likes of the 5th Dimension - all adding that delightful time and place to the early 70s proceedings. Magpie is a 70s British delight - don't pass it up!