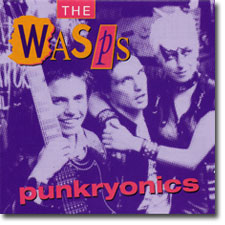 The Wasps reissue on Overground Records is just the kind of teenage punk treat I like to hear - and similar to Damaged Goods' reissue of the UK punk collection from 1977, Raw Deal. The Wasps' Punkryonics is the real and raw deal. At a time when the music climate was changing from month to month (what's in today is out tomorrow), The Wasps' music recorded between 1977 and 1979 not only stands up today, but it also has some down-right classic moments which must've rocked back in the day.

Punkryonics culls the classic punk rock single tracks Teenage Treats and She Made Magic, demos of JJJenny (how this one remained unreleased until now is a mystery, it's a killer punk rock track), Run Run Angelica and Rubber Cars (later recorded for an RCA single), and a caustic live version of Can't Wait Till '78 from the Live at the Vortex compilation (from December 1977).

Punkryonics could only be more perfect if it included all of The Wasps' recordings: for some reason Overground Records decided to not include The Wasps' live version of The Velvet Underground's Waiting For My Man from the Live at the Vortex album, as well as two Peel Sessions, and the RCA version of Rubber Cars (opting for a demo version here). Also, mentioned in the liner notes is the fact that The Wasps used to perform a version of Deliverance's theme song Dueling Banjos (before The Toy Dolls did it?) to calm their vocalist Jesse Lynn-Dean down. Still, in this day and age, this is just about the only way to hear the 70s punk band The Wasps, and what's here is great stuff including 10 previously unreleased songs.