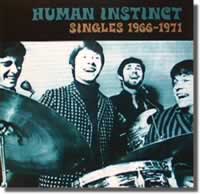 The Human Instinct were a mid to late 1960s rock band who came from the mysterious land that is New Zealand. With a supreme love for all things British, in 1966 the Human Instinct went to the UK to try their hand at being the next big hitmakers with mixed results.

After a handful of chart failing singles (tracks 1 - 6 on this disc) which are a mixed bag of influences from the Kinks influence heard on Track 2 I Want To Be Loved By You My Friend to the out-right go-go sound of Track 5 Go-Go, which could have been the theme to a go-go girl tv show.

It wasn't until their move to Deram for two singles (tracks 7 - 10) that the Human Instinct finally got a grasp of anything resembling a unique sound. Track 7 A Day In My Mind's Mind, is most certainly their best and most exciting song. From it's morse code / guitar feedback freak out introduction to its amazing harmony and harp / flute orchestration, it is a highpoint in hard rocking 1960s psych. Track 8 Death Of The Seaside is also an amazing song about the death of the Australian Prime Minister Harold Holt - and is another gem of psych pop with it's hummable melody and pounding piano accents.

After this prime the Human Instinct could never again reach these heights. Renaissance Fair (Track 9) is a commendable cover of the Byrds song, which has a great combination of rocking and orchestration. Track 10 - Pink Dawn (B-Side of A Day In My Mind's Mind) is also a pretty cool rant of psych with some pounding drums and warped electric guitar. By the time of Track 11 I Think I'll Go Home - the Human Instinct had changed so much that only one original member was left - Maurice Greer - and the rest of the cd is augmented by the heavily Hendrix influenced guitar playing of guitar god Billy TK. Track 11 I Think I'll Go Home is actually a somewhat substandard cover of Neil Young's Everybody Knows this Is Nowhere which doesn't add much to the original. Track 12 - is a fairly interesting take on the Kinks' You Really Got Me which somehow combines jolly British corniness in the vocals with Hendrix styled wah wah for a memorable cover. Things have really gone hay-wire by the time of tracks like Midnight Sun (#13), Idea (#14), and Black Sally (#15 - which is a Mecca cover written by a Dennis Wilson un-related to the Beach Boys - who later went onto Kahvas Jute - which is similar to latter period Human Instinct) with all sorts of over the top guitar pyrotechnics, half-baked songwriting and a love for power trio grunge - sadly not truly up to the par of the groups I'm sure they idolized (mainly Hendrix). If Black Sabbath meets Hendrix hard rock is your thing, you may actually love these tracks but I for one was left wanting. Track 16 - Tomorrow is a John Congos cover which thankfully is an acoustic number which has something to offer thanks to a great songwriter and a faithfully somber rendition. Track 17 - Rainbow World and Track 18 - Highway are a little more subtle in the hard rock area - entering into Grand Funk style and in general are more enticing than the Hendrix influenced period - for some outright funky early 70s hard rock. Track 19 - Texas Sparrow (a cover of a Michael Rabon and Choctaw song which came out on the UNI label in 1971) is another acoustic number which has a Rod Stewart sound and doesn't work quite as well. The last track - track 20 - Children Of The World is an interesting song in that there is actually a children's chorus which sings along with the group - which goes un-explained in the liner notes - it's a B-side and not included on any of their lps - which helps to end this singles compilation on an up note. I sure would be curious to know the story behind this song - it almost sounds like it could be the theme song to a children's tv show.

The Human Instinct are a frustrating band - just when you think you can pin down their sound, they would change it - making it so they never really were able to hone a defining sound. While I'm glad to be able to hear both the 1960s psych rock and the early 1970s hard rock from New Zealand - I think because of their hybrid nature The Human Instinct are not greatly served by a single compilation.