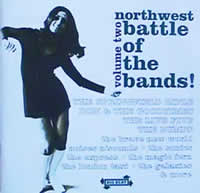 If you have Volume One, and you like it, you'll probably want to pick this one up too -- it's just as good. Round 2 is again a collection of bands that recorded for the Jerden label in the mid-sixties. Jerry Dennon was the man behind this label (yes, you've figured it out -- he combined the first three letters of his first name with the first three of his last name to come up with this highly original moniker).

Jerden was THE label in the Northwest in the sixties. After having a HUGE hit with the Kingsmen's "Louie, Louie" in 1963, Dennon figured it would only be a matter of time before he duplicated the success of that single. Therefore, his strategy consisted of nonstop recording of every decent band in the Northwest -- the old "if you throw enough against the wall, eventually something will stick" theory. He figured he was bound to hit it big again at some point. Unfortunately, this strategy never did result in another big hit for Jerden.

What it did result in, however, (fortunately for you), is a veritable treasure trove of expertly recorded primal rock n' roll. Dennon recorded an unbelievably large amount of material -- I suspect there will be more volumes forthcoming -- but the most amazing thing is that so many of these songs are of such high quality. Most of the trademark Northwest sounds are here -- the punchy attack, the pounding drums, searing guitar breaks, along with a few songs in a bit of a more psychedelic vein, since this volume does deal with material recorded a little bit later than the material on Volume One.

All in all, it's hard to pick favorites here, most of the songs are uniformly of very good quality. I will, however, mention a few things about a few of these songs. Track #4 features Rocky and the Riddlers tackling the Wailers' song "You Weren't Using Your Head" which I actually prefer to the original. The Riddlers give it a real raw, raunchy sound that I think works better. If you like the sound of this one, be sure to search out their song "Flash and Crash," available on one of the 'Back from the Grave' comps.

Track #15 is a song called "Alice Designs", written for Mr. Lucky and the Gamblers by Tandyn Almer, famous for writing "Along Comes Mary" for the Association. This guy must have had a thing for sly drug references (say the title slowly). Track #20 is the Eugene, Oregon band The Moguls with their sneering "Try Me". The b-side of this single was a song called "Ski Bum", which is even better. Find it on another 'Back from the Grave' comp.

Track #24 is the band the New Yorkers, who despite that name, were actually from Portland, Oregon. They took the name in order to do a promotional tour for Chrysler, who told them they had to be named after one of their cars! Even more interesting is the fact that this band became the Hudson Brothers in the '70s! Didn't they have their own TV show? Didn't one of them marry Goldie Hawn? And isn't he the father of Kate Hudson?

Track #27 is by a band called the Purple Gang, who had nothing to do with the English band with the same name (of "Granny Takes a Trip Fame"). Track #30 is a fun radio spot for Nordstrom Shoes, recorded by the band Springfield Rifle.

other Northwest Battle of the Bands discs in the gullbuy: