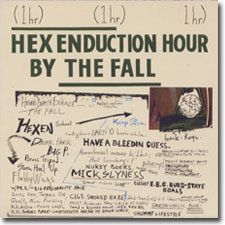 This is a big deal. The CD re-release of Hex Enduction Hour, the fourth Fall album, is a pivotal and seminal part of The Fall's history. I purchased this record when it was originally released, in 1982. There was massive critical acclaim for the LP. Despite that fact, I didn't like it. It was too wordy and sparse and was an intense listen requiring detailed attention. I was confused because I was hyped up on Totally Wired and Bingo Master's Break Out. I guess this came as a shock. It just sounded too experimental. Now, today, this is my favorite Fall album and the favorite of many fans. It contains stalwart live performed tracks and some of the best, most scathing of Mark E. Smith's addled, blathering, genius.

This is a two disc release with a cardboard sleeve wrap. The original cover, created by Mark E. Smith, is used as a graphic on the front and back of the sleeve and adapted to the front of the CD jewel case format. The gritty graphics feel sanitized in clear plastic. Fold-out liner notes house an album review and educational tool by Daryl Easlea (writer, club owner, ex record exec) and some Hex era performance photos and clippings. There is also a bonus disc that contains Peel Session tracks and live tracks and a "question marked" Kamera recording of I'm Into C.B.

From the first of many listens, I can assure you that Hex is a well mastered CD. It is clean and detailed unlike the muddy past CD versions of Fall albums, This Nation's Saving Grace and The Wonderful and Frightening World of The Fall. This is carefully executed. You will have to pardon the slick "plastic-ness" that kills the feeling of first holding the LP in 1982.

First track, The Classical. Double drums rolling and crashing and raw disharmonic guitar work comes in hot. A long performed and favorite Fall track, in sound and lyrics it punches and lashes straight out of the gate,

Smith attacks and rails on British society, celebrity, romance and relationships and a sarcastic ending, "I've never felt better in my life". Smith is the master of summing up the disenchantment of the time. It is stated in the Fall chronicles that the use of the "n-word" killed a record deal with Motowns. Whatever. The Classical is a classic and the lyrics are manifesto poetry and still just as ascerbic.

Jaw Bone and the Air Rifle is the story of a rabbit hunter shooting off a piece of a "valued tomb" and his conversation with the grave keeper. He speaks of ruined life and love and the grave keeper hands him a lamb's jaw bone with a curse from the Brothers Pentacle Church. This is to make the rifleman more of a man. Now he is truly cursed. The lyrics are brilliant and could stand alone being read rather than being sung. The music in some ways belies the lyrics. It is solid early Fall music but the mathematical and frenetic music gets in the way of the lyrics. A great song but I never really listened to the words till I read along. If the tale is true, well told. If it be fantasy, what prose.

The song Hip Priest finally makes its appearance off stage and into recorded history. This is one of the moniker, all-time great, Fall tracks. Eight minutes of what seems like improvisation, can't be. It had been performed three-plus years prior to Hex Enduction. Slow and tense. Taut but slack. Eerie and dark. The song evoked creepiness as the soundtrack to the ending house scene of The Silence Of The Lambs. Mark delivers the song like the lyrics suggest, drinking and toasting to the under appreciated Hip Priest. If you love the Fall this is one of the solidifying moments of an intense and turbulent relationship.

The Casio VL Tone intro to Fortress/Deer Park is a familiar sound. Heard on the "Da Da Da" song by Trio or Human League's Dare. The Fall also use the "ground breaking" little synthesizer to intro The Man Who's Head Expanded, released shortly after Hex. More up and poppish and "rocking" tune than others preceding it is another set of amazing lyrics. Too personal to truly understand the meaning the themes are tried and true to Mark E, Nazism, art and culture, capitalism and subculture leaving one "still adrift of".

Mere Psued Mag Ed starts with a guitar strumming folksy tale and then abruptly goes into Fall discordance and anger. Railing against the music critics and their medium Smith states that the "heart organ is in the right place. His brain is in his arse". Smith wants to strip away the glamour of the critic and show that they are just pandering to trend and not the independents. Just like the musicians of the "new wave" critics wanted the celebrity and fame over artistic integrity. Artistic integrity always being the law of Mark E. Smith and his prolific career, art over finances.

On the original vinyl Winter (Hostel Maxi) ends side one and Winter 2 starts side two. CD technology enables the two to play back to back without the effort of flipping over the album. It plays through like an old eight track tape, fading out and then clicking to the next channel as the song then fades back up. Perhaps it reduces the original intended effect but it is certainly more efficient. Together they are a great pair. Starting slowly with Smith, bass, some chintzy keyboard work and cymbal taps the guitars crash in and then slowly back to heavy plodding as Mark E. spins his tale in a classic Fall sound, music pushing the story.

"When what used to excite you does not" is the intro-lyric to Just Step S'ways. Another classic Fall song. Lighter and more humorous than the darker material on the album it still has the typical Fall stance. Futurism and popular culture and what it takes to be a celebrity is better stepped aside of. As Smith sings you hear his own voice as "back up" vocal, a yarn in a yarn. It is effective like Anthrax by Gang of Four or many tracks by Scotland's Prolapse. It is an effective tool adding dimension, layers and making a deeper and more engaging listening experience.

Who Makes The Nazis? is one of my ultimate, favorite Fall songs. A signature of sound and content in the arsenal of the Fall's repertoire. From the blurting, declaring question to the sour guitar and clunking bass against the marching beat, Mark E's sing/speak, this is true Fall. The Zappa-ish moan back-up, the two different Smith's backing himself - one untreated and the other "megaphonic"- the smashing bottles and the kazoo honking make this song so intricate. To the un-Fall-en ear it is a mess. Seemingly improvisational it is actually intricate in style, sound and lyrics. It is a deep and historical question. Is it the passionate liberals that create an impassioned right wing? Is it Orwellian omens that are turned into a handbook for an ordered society? Do you mind telling me?

Iceland is a story about Smith's experience at the Cafe Iol in Reykjavick. Iceland's capital was then famous for Reagan and Gorbachev's arms talks in the early 80's. The song is a poetry reading with banjo and piano accompaniment. This is a very personal piece. Smith is humbled by his experiences and expressing self hatred and weakness. Is it Smith who falls down flat without notice? Is it metaphor for the surroundings? There is reference to Megas Jonsson whom is considered to be the "father of Icelandic rock 'n' roll. Heavily involved with drugs and alcohol he was shunned by radio and society . Jonsson released a double album in 1979, "Plans for a Suicide", his last recordings, and retired. He is now employed as a dock worker. Humbled in Iceland.

And This Day is last from the original LP. At 10 minutes, a discordant and intense, mashed cut-up from its original 25 minutes. Chopping up the parts and restructuring you get a "frankenstonian" monster of impossible notes, lyrics and sound. It is a good exclamation point at the end of a trek of purging, questioning and spewing.

The bonus CD material is somewhat successful. Deer Park (first of 2 renditions) is clean and clear. Who Makes The Nazis? is spare and "unplugged" with ukulele. By far the best song of the bonus is the third track, I'm Into CB (the 'Kamera ERA004, April 1982 7"-first of 2 renditions). It is well played and produced. Jazzed Up Punk Shit is poorly recorded but the performance is great and makes for a great "lo-fi" experience. There are aslo two versions of And This Day, so you better like that song. The extra CD is a nice addition to the re-release but more for the Fall lover than the casual fan.

Hex Enduction Hour is true art rock. There is blatant creativity throughout the album. Musically and lyrically intense it comes from the diary and sketchbook of Smith's experiences and discoveries. Critical success, a fan base that allowed him to create, Smith was hitting a creative stride that would rarely, if ever, slow down. There is absolutely no regard for viability. It is evolution and creation. Hex's position in punk/rock history is still a fresh battle cry against the stale pabulum that is spewed out by fake bands looking to be the next big thing "eating the past" and repackaging the same old for resale to an unknowing public. This album is a reprinting of a classic, under read novel. The lesson here is just as important today as when it was first brought to bear, be true to your vision, shun technology and Just Step S'ways from the traps of society and the track of perceived success and promised future of a "shining city on the hill".